A year ago, I wrote about some fun times at Como Park Zoo and Conservatory in a blog post called It Helps Us to Say Thanks.  My brothers and I thought it would be nice to get a memorial paver there in memory of Mom and Dad.  We suggested that memorials be given to Como in honor of our Mom who died last year.  We recently submitted a poem that we all liked, but it didn’t get approved because it was too religious.  It wasn’t really a poem:  It was a prayer!  Since the zoo is a public place, they said they could not inscribe a prayer on a paver.

So I wrote this instead:

Thanks Mom and Dad
For the family that we were with you,
And teaching us truth in all that we do.
By showing us what is wrong what is right,
And helping us keep our attitudes bright.
By having you laugh around our small brood,
It helped us to stay in such a fun mood.
By caring for us and showing the way,
Work is important but so is to play.
By loving the world in which we do live,
All of creation it helps us to give.
Kindness to people and animals too,
Tending the flowers and trees as did you.
By thanking the wind the sail that it blew,
Moving us along to explore what’s new.
By missing loved ones when they go their way
We do that now too, but memories stay!

Mom loved flowers and they both loved to sail.  I thought this would be a nice remembrance!  I hope Como thinks so too. 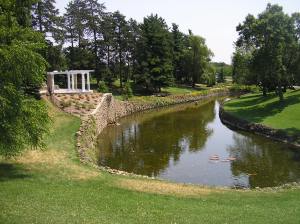 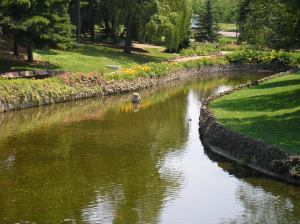 Can you find the frog?

They say the frog has been at Como Zoo since 1923, but when I looked at the pond, I thought it looked different from when I was a kid. I remember a small, greenish blue pool with wild things growing about. Now the frog lives in a very nice large pond surrounded by trees. Since the frog’s head looks straight towards the conservatory, he does not see the white pergola that is up on the hill just to the right of him. It looks as if the frog would be able to see the conservatory where he sits. He might even have been able to witness all the additions and improvements that have been going on over the years, if such a thing was possible. 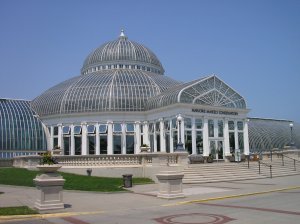 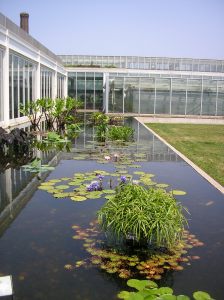 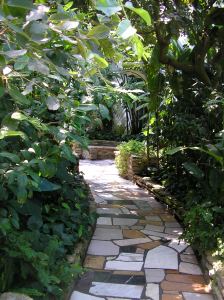 Pathway to the Sunken Flower Garden

The conservatory is where I went on field trips with my grade school classmates. We learned what banana trees look like and saw other sorts of vegetation that does not normally grow in Minnesota. After seeing all the greenery, we were happy to gaze at the surprising beauty of the colorful flowers in the sunken flower garden. It was nice to see that building has not changed, just as the frog has stayed the same. 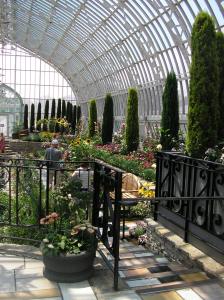 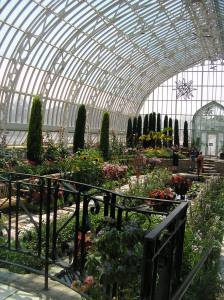 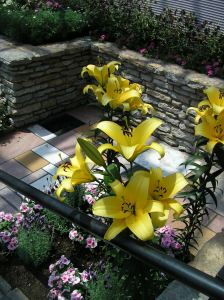 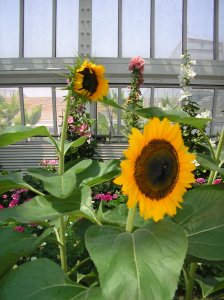 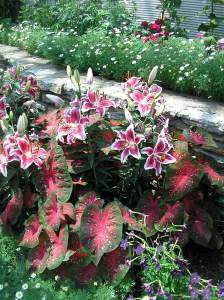 These Photos are from the Sunken Flower Garden

All the talk about banana trees, led my classmates and me to the monkey. The monkey lived in a building where he could go look outside at us humans from behind bars, and then we could see him from inside the building too. Their homes used to look like something straight out of a Curious George Book. The lucky monkeys that live there now will soon be swinging about on a new and very large island that is being built just for them. 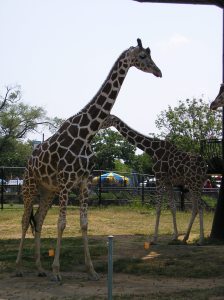 I quickly walked around the zoo since the humidity and heat caused rivets of sweat to stream down my back. A giraffe posed for me and seemed happy that I was taking his picture. The polar bear that just arrived from the recently flooded Duluth Zoo was hiding behind a rock trying to stay out of the scorching heat. The lions moped about and didn’t even want to play with their toys. Even Sparky the Seal was not scheduled to perform. The sea otter looked to be the happiest as he swam around in the circular pool of water gladly accepting little fish that the visitors bought to feed him.

There are lots of treats for people too. The antique popcorn wagon is always fun to see, and there are many other stands decorated with big bags of cotton candy where treats such as pop, hotdogs, and ice cream bars can be found. Now there are even places for people to sit down to eat.

There is even an amusement park where people who enjoy rides can visit.  It seemed as if their screams were muffled by the thick air. Nowadays, the beautifully carved carousel that was built in 1914 is protected by a large circular brick building. 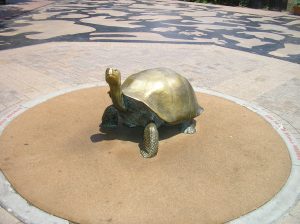 I circled around the Toby the Tortoise statue to read some of the commemorative bricks. Some bricks show a path that is slightly worn down by the many people who have walked there. A lady’s face is etched into one brick, and another brick remembered the couple who walked around the park every day. If Mom and Dad were here, they would say not to make such a fuss because that was their way. Yet, when I saw the Como Friends magazine sitting on Mom’s table and remembered the times we visited the zoo and conservatory together and the picnics we went on, I thought it would be a good place to request donations in her memory. My brother agreed with me and said that Mom had asked to go for a visit there a few days before she died. Even though Mom and Dad wouldn’t want the fuss, it helps us to say thanks.

Now all we need to do is figure out what to put on the brick. 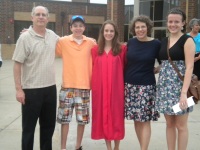 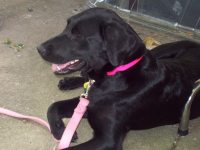 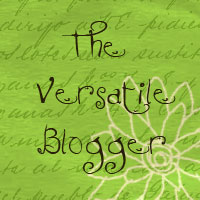 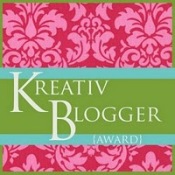